San Diego, CA and Tokyo, Japan, September 26, 2005In a demonstration that could foretell the future of videoconferencing, scientific visualization and digital cinema deployment, scientists from around the world meeting at iGrid 2005 in San Diego were treated to the world’s first real-time, international transmission of super high-definition (SHD) 4K digital video. 4K images have roughly 4,000 horizontal pixels – offering approximately four times the resolution of the most widely-used HD television format, and 24 times that of a standard broadcast TV signal. The 4K transmission linked the University of California, San Diego and Keio University in Tokyo via 15,000 kilometers (roughly 9,000 miles) of gigabit Internet Protocol (IP) optical-fiber networks, and allowed organizers to show attendees the most varied 4K content ever presented at a single event anywhere in the world to date.

In their remarks, the two leaders emphasized the benefits of networked collaboration between their respective institutions, and called for further cooperation between Calit2 and Keio’s Research Institute for Digital Media and Content (DMC).

“This demonstration of trans-Pacific, real-time 4K streaming media pushes the envelope of today’s advanced research networks,” said Keio president Anzai. “We now know that these networks can reliably carry the world’s newest and highest-quality digital media, even over long distances, both live and pre-recorded.”

“Seeing such dramatic examples of networked 4K media for science, medicine, education, culture, art and entertainment inspires the imagination about what can be done with advanced visualization and communications technology,” said UCSD chancellor Marye Anne Fox.

At 8 megapixels per frame, uncompressed streaming of 4K video requires a data rate greater than 6 Gigabits per second (Gbps). In many places though, the signal must be carried over 1 Gbps circuits. To do so efficiently, the iGrid demonstration utilized prototype JPEG 2000 codecs from NTT Network Innovation Labs, designed to compress and decompress 4K digital video in real time to 200-400 Mbps for direct connection to gigabit IP networks. NTT Labs also provided prototype Flexcast systems that enable multicast delivery of 4K video and audio over traditional unicast networks by just adding functions to existing networks.

4K is a particularly significant new image format because it will be widely used for future digital cinema theatrical distribution under new specifications proposed by Digital Cinema Initiatives, LLC, a consortium of the seven major Hollywood studios.

“These iGrid 2005 demonstrations prove, for the first time, that networked distribution of 4K digital cinema internationally is not only technically feasible, but the same infrastructure can also be used to distribute what Hollywood calls ‘other digital stuff’, or ODS,” said Kazuo Hagimoto, director of NTT Network Innovation Laboratories. “ODS includes live music concerts, sports and various content genres beyond traditional theatrical-release feature movies. In networking terms, ‘live’ requires more reliable throughput and low-latency responsiveness. In many ways, iGrid 2005 confirms that even these most demanding types of streaming media distribution can be done over gigabit IP networks today.”

In addition to Keio’s DMC, NTT Network Innovation Labs and Calit2 at UCSD, organizers of the ground-breaking 4K demonstration at iGrid 2005 are: the University of Illinois at Chicago’s Electronic Visualization Lab (EVL), and Pacific Interface of Oakland, CA.

“Like many at iGrid, I am excited to see with my own eyes for the first time 4K scientific visualizations of the highest caliber streaming in real time onto the big screen with digital cinema quality,” said Larry Smarr, director of Calit2, professor of computer science in UCSD’s Jacobs School of Engineering, and host of iGrid 2005. “All universities should be interested in this pioneering combination of optical IP networking, distributed Grid computing and 4K media technology. For scientists working with very large data sets in collaborations that can span the globe, this technology offers a dramatic new remote visualization capability.”

One particularly challenging part of these demonstrations will be the Soundscape live audio mix in the Calit2 auditorium, using professional-quality, multi-channel digital music and sound effects originating from Skywalker Sound audio servers in the San Francisco Bay Area. The audio is synchronized over IP networks with the 4K motion pictures streaming from NTT servers located at Keio/DMC in Tokyo. This Soundscape demonstration was organized with additional collaboration from Skywalker Sound, UCSD’s Center for Research in Computing and the Arts (CRCA), Youth Radio, the Institute for Next Generation Internet at San Francisco State University, and the University of California Office of the President (UCOP).

“It has never before been possible to do an international 4K-over-IP live streaming demonstration on this scale before. It is only feasible at iGrid 2005 because of the emerging Global Lambda Integrated Facility (GLIF), a new generation of cyberinfrastructure featuring multiple 10 gigabit and 1 gigabit lightpaths over optical fiber,” said Tom DeFanti, co-chair of iGrid. “Our long-term goal is to enable 4K deployment reaching from the science lab to the film lab, from the Hollywood post-house to the Japanese schoolhouse.”

The 4K transmissions from Tokyo to San Diego during iGrid 2005 travel through a network of high-performance optical fiber links inter-operating at the Ethernet (L2) layer. The signals cross the Pacific on theJGN 2/NICT network. This, in turn, connects through the optical switching hubs at StarLight in Chicago and the Pacific Northwest GigaPOP in Seattle to key American ‘LambdaGrids’ – CAVEwave, part of the U.S. National LambdaRail, and Pacific Wave.

“The GLIF approach being pioneered at iGrid 2005 is going to be central to commercial implementation of collaborative production, post-production and distribution of all types of digital media,” said Laurin Herr, president of Pacific Interface and one of the organizers of the 4K demonstration at iGrid. “The lessons learned from these first international 4K real-time streaming demonstrations will help researchers in America and Japan already working on the CineGrid project to better understand how to support 4K for digital cinema, ODS delivered to digital theaters, and many other scientific, medical and educational visualization applications.” 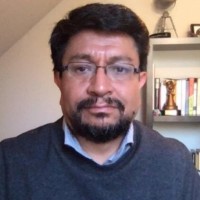